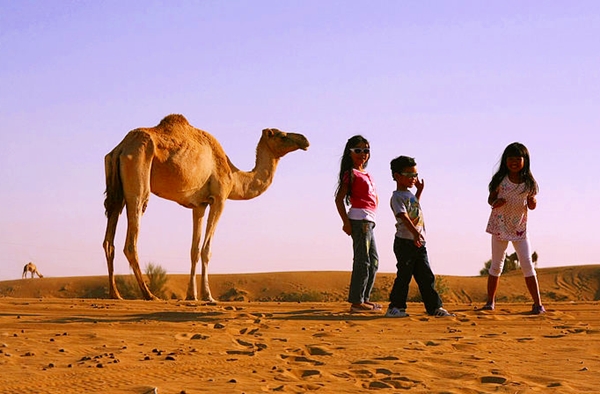 Dramatic landscapes and adventure opportunities don’t come much more striking than the setting for the planet Jakku in Star Wars: The Force Awakens. The scenes were filmed in the Abu Dhabi desert and it’s a great place for overnight sleeping under the stars. Moreeb dune is considered by many to be the world’s tallest and is a good target for off-roading campers. It’s around 300 metres high and rests at an angle of around 50 degrees, making it great for dune-bashing adventures before an overnight campfire and stargazing.


Cruise the dunes on desert safari

Pulling off-road in your own vehicle and furiously driving over the dunes is only recommended if you’re an experienced desert driver and know what you’re doing. A more suitable option is probably an organised desert safari. Platinum Heritage offers upscale tours, which highlight Emirati culture and heritage, with additional add-ons such as camel rides, astronomy, falconry and Bedouin breakfasts.

Dirt bike in the dessert

Love the feel and experience of dune bashing or quad bike rides in the desert? Take that to the next level with motocross, also known as dirt-biking, which will see you ride high-performance bikes across the rugged terrain. European and Arab Championship winners provide training and race season activities at the Motocross Academy in Jebel Ali.

Custom-built bikes with extra-wide wheels make cycling on the sand easier to manage. Powering your way up a dune out on the fringes of the Empty Quarter still requires a lot of leg power, but freewheeling down the other side makes it all worthwhile. Follow a guided tour organised by Qasr Al Sarab Desert Resort By Anantara, or go off-piste and on your own to explore the dunes.

Hike the mountains and wadis of the UAE

The wadis and mountains of the UAE have plenty of opportunity for an adventure. While you can set out on your own (always let people know where you’re going and take necessary safety precautions), the best thing to do is join fellow enthusiasts and perhaps make new friends. Various groups on Meetup.com arrange thousands of outdoor gatherings in a bewildering variety of places. Search for UAE Trekkers and join a countrywide community that frequently hits local mountains for a good explore.

Progress from a desert safari in the back of a 4×4 to conquering the dunes yourself. Numerous companies in various points of the Arabian Desert have quad bike and dune buggy rentals. The rugged and surprisingly agile vehicles can reach high speeds and are excellent climbers. You can go solo and charge up and down the dunes or follow a guided tour of the steeper slopes and well-worn routes over the sands. Equipment and basic training is provided.

Any trip to Sir Bani Yas Island feels like an adventure. Perhaps it is something to do with the cheetahs and giraffes that call the desert island home. Take the spirit of outdoor pursuits to the next level by riding a trusty steed through the Arabian Wildlife Park. Experienced riders can trot from the Bani Yas Stables out across exotic landscapes and amid the free roaming animals from sunrise to sunset.

Slide down the sand on a board

It’s like snowboarding, but on sand. Why wouldn’t you sandboard? Book the morning safari with sandboarding offered by Dream Explorer and as well as exploring the desert from a Hummer, you also get some time to board down the dunes.

Get into white water rafting in Al Ain

We’re not blessed with white water rapids on rivers in these parts, but, this being the UAE, somebody just went out and built some. The artificial river for rafting and kayaking is just one of the marvels at Al Ain outdoor sports complex, Wadi Adventure. Three levels of difficulty are offered, ranging from casual group paddles all the way to World Championship (the finals were held on these waters) level of adventure.

This expedition on the water offers both a strong workout and an opportunity to see the breadth of Abu Dhabi’s vast and varied environment. Paddle the lush greenery of the mangroves to see turtles, snakes, fish, flamingos and varied birdlife in general. Guides lead the self-paddle tours and explain ecological facts, while night tours in LED-light-bottomed boats offer a more ethereal experience.

Ride in a robot shark

“What did you do at the weekend Dave?” colleagues might ask. “Oh, nothing much. Just went for a ride through the Arabian Gulf in a robotic underwater shark”. To indulge your James Bond fantasies and win weekend thrill-seeking competitions forever, book yourself in for the Water Shark Adventure. Even if your name isn’t Dave.

Fact – the waters of the UAE do not compare to Mexico, Bali, Australia or California when it comes to big waves. But surfing in Dubai is super-fun. It has a brilliant community spirit and it’s the ideal place to learn the basics or indulge a passion. As well as selling clothing and equipment, running yoga sessions and monitoring and reporting on the day’s surfing conditions, the crew at Surf House Dubai are an authority on all wave-related matters in the region. Oh, they also offer frequent surfari excursions to international locations, too. Swell.

Keep telling yourself they’re harmless and accept that the sharks off the East Coast could have you for breakfast if they wanted. They don’t want to. The silent majesty of seeing sharks in their natural habitat is one of the planet’s finest and most accessible animal encounters. Snorkellers off Snoopy Rock in Fujairah frequently report seeing blacktip reef sharks and you can enhance your chances by taking a scuba tour with a company such as Al Boom Diving.

Canyoning opportunities in the UAE are limited, but with a tour provider such as Adventurati, you can sample the sport at an accessible pace. Climb and scramble through a wadi, hike the countryside and wade through water on an entry-level canyoning course in Wadi Shawka.

This beautiful sports sits somewhere between a skydive and a desert safari on the adventure scale and is perhaps best described as “the kiteboarding of the desert”. Like a parachute, but launched from the ground rather than a plane, a paragliding flight allows you to soar over the desert sands and see the dune ridges, Arabian sunset and glory of the vast open lands from the sky. Training for solo flights or tandem jumps are available and there is every possibility that after one flight you will catch the paragliding bug and want more.

Have an aerial adventure at Aventura

Invoke your inner Tarzan on this 35,000 square metre adventure playground. The aerial assault course has around 80 activities, most of which involve dangling, balancing and swinging at swoon-inducing heights. Zip-lines, rope walks and high-rise swings are all featured with varying degrees of difficulty.

Jump out of a plane over the Palm Jumeirah

Skydive selfies over the Atlantis The Palm are one of the ultimate Dubai accessories. Tandem jumps with qualified, experienced Skydive Dubai jumpers take a bit of courage, but if you dare to air there is no thrill quite like it.

Watch the sun rise over the desert

The early morning start could be a bit of a struggle if you’re usually a light riser, but the clear desert skies between September and May are best viewed by the very first light of dawn. From the calm of your hot air balloon you can watch light appear over the horizon and see the true beauty of the vast desert below. But what’s best of all is that you can then gently drop another hundred feet and see it all over again as the sun rises.

Tackle the Via Ferrata in Ras Al Khaimah

This adventurous mountain climb featuring a 300-metre-long zip-line at the end is a must-try for thrill-seekers. It’s a spectacular way to experience the UAE’s highest mountain, Jebel Jais, and the zip-line comes in varying degrees of difficulty (if you’re not ready for the big leap yet, a 50-metre wire is available to initiate you.

Take a gyrocopter flight around the JBR coast

Sometimes you need only to sit still to have the greatest adventures. That’s the theory behind Skydive Dubai’s gyrocopter flights anyway. The motorised two-seater craft buzzes around the Burj Al Arab, Palm Jumeirah and the picture postcard Dubai coast giving you views the likes of which you have never seen before.

We know – it is not exactly an outdoor adventure, but when you’re melting outdoors, this indoor ski slope is about as al fresco as you could hope to be. The indoor resort’s 3,000 square metres of real snow offer up plenty of extreme fun. Don’t just peer through the Mall of the Emirates window at the snowball fights or penguin-watch at the foot of the slope. Get in and try your hand at the surprisingly authentic skiing and snowboarding runs.