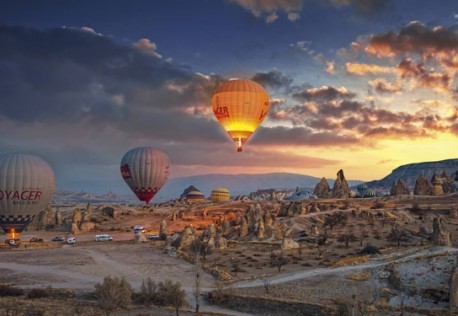 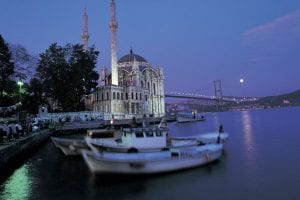 The very name ‘Istanbul’ smacks of exoticism — towering minarets, domed bathhouses, perfumed sweetmeats, fez-wearing barbers, and a mythical bridge between East and West, with an overlay of sophistication. It’s a place where historical and architectural landmarks like the Topkapi Palace and Blue Mosque stand among the latest in designer boutiques and famous-name hotels.
The other big city destination for overseas visitors is Izmir, down on the Aegean Sea. There have been incomers here for thousands of years, as neighbouring Ephesus was first a Greek and then a Roman city. Back then, expeditions set forth from Izmir’s harbour; today it’s a relaxed port resort at the heart of Turkish coffee culture, with excellent beaches within easy reach.

There’s a rich tapestry of culture all over the country, including major jazz festivals in Istanbul and Izmir, film festivals in Antalya and Marmaris and the Aspendos International Opera & Ballet Festival. 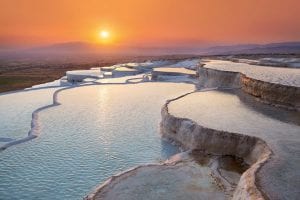 Turkey excels in archaeological sites and lots are within reach of the beach, as the Greeks and Romans liked to be beside the seaside, too. The 13 UNESCO World Heritage Sites include Pamukkale, a set of gleaming white infinity pools formed by hot springs, the rock chimneys of Cappadocia’s Goreme Valley, and Troy, one of the most famous sites in the world. New on the list this year are the Ottoman settlement of Cumalikizik (Bursa) and Pergamon (Izmir), the remains of a major Hellenistic centre of learning.

The resort of Belek, east of Antalya on the Mediterranean coast, is the undisputed king of Turkish golf, and one of Europe’s undoubted golfing hotspots. It boasts a total of 15 courses, four of which are in Europe’s top 100, and many are designed by golf’s famous names such as Colin Montgomerie and Nick Faldo. 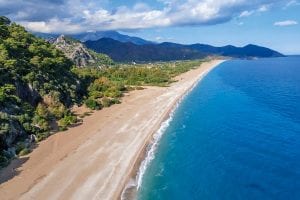 With nearly 400 Blue Flag beaches and approximately 4,970 miles of coastline, there’s no shortage of places to roll out your towel.. Meanwhile, up on the Aegean coast, the resort that everyone is talking about is Alacati, which boasts great family sand and is a hotspot for windsurfers.

The Turks have a long history of thermal bathing, and perhaps the best place to experience this tradition is Afyon — Turkey’s spa centre, with thermal and mud baths found in and around the city. Of course, no matter which part of Turkey you visit, there’s the opportunity to sample one of the country’s famous local bathhouses, which are accustomed to tourists and wonderfully inexpensive.

There are two key elements to great Turkish food: ingredients and location.  Among themany Turkish delicacies on offer, watch out for burek — tasty savoury pies with flaky pastry, and pide, the Turkish pizza. Many meals end with honey-infused baklava, helped along with full-flavoured Turkish red wine and finished off with raki — and, of course, Turkish coffee, thick and sweet.

First World War centenary events are not just the preserve of Western Europe. The Great War was also played out in Turkey, and next year is the 100th anniversary of the landing of Australian, New Zealand and British troops at Anzac Cove.  Visitors to Gallipoli often combine it with the UNESCO site of Troy. 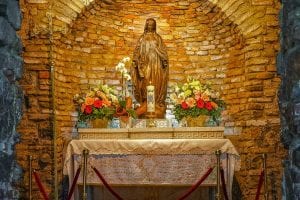 A vast number of well-preserved religious sites can be found all over Turkey, with places of pilgrimage for all three major monotheistic religions: Islam, Judaism and Christianity.