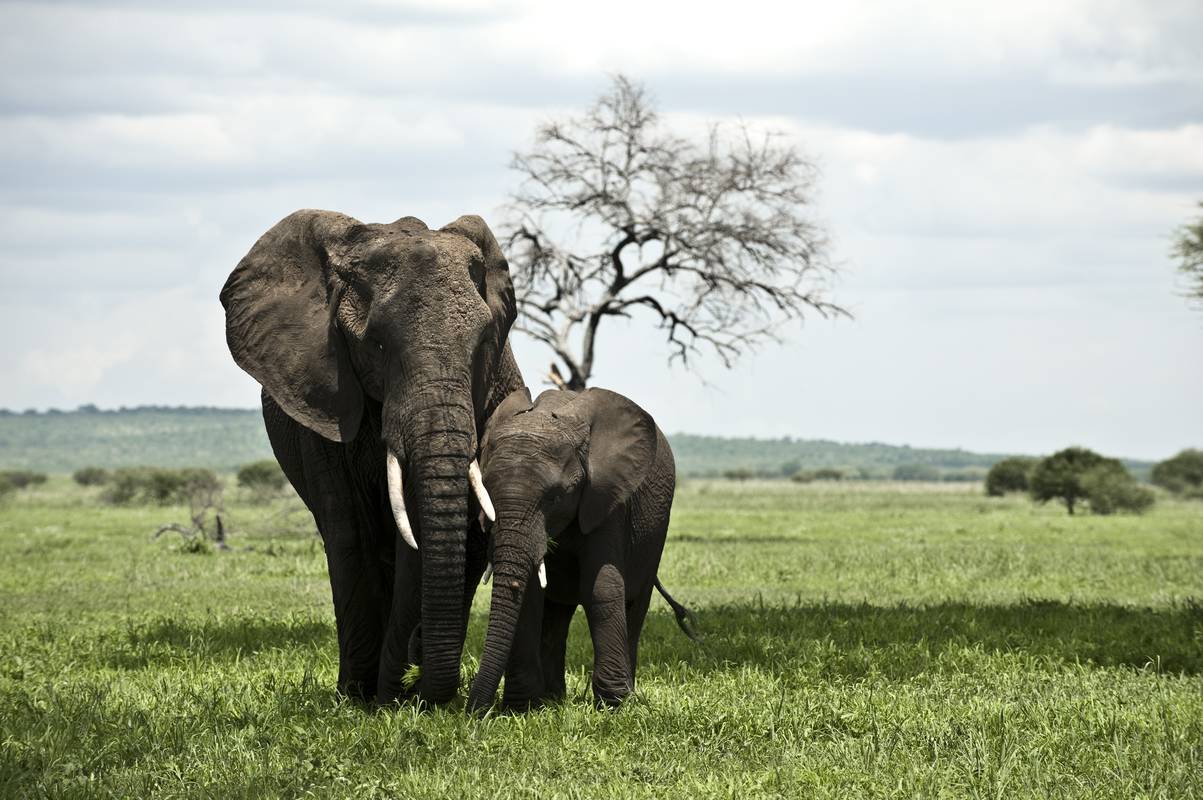 You know that ‘bucket list’ we all have…   Well, this adventure was very high on my list of dreams and I was so fortunate and blessed to see it come true…  It did not fail my expectations and I have to share it with you.
We left Johannesburg at about 11h00 on Sunday 5 May with Kenya Airways for a short flight to Nairobi (4 hours 15 minutes).  From Nairobi, it was a further short flight on Precision Air to Kilimanjaro (50 minutes).
We landed in Kilimanjaro just after 19h00 (18h00 SA time) in pouring rain where we were met by the friendly Safari Team.  Whilst we sat warm and cozy in the bus waiting for our transfer to our hotel in Arusha, they had to endure the rain and ensure all our luggage got loaded on top of the bus.  Needless to say, some people’s luggage got a bit wet but nothing could deter anyone of us from having a great time.
Arriving in the dark and heavy rain, we had no idea where we were going.  What a surprise the next morning when we could actually see and experience the beautiful Serena Mountain Village Lodge – this lodge is set amid coffee plantations and on the shore of Lake Duluti.  I was told by the local people that this lake has no depth (very very deep) and formed in a crater. 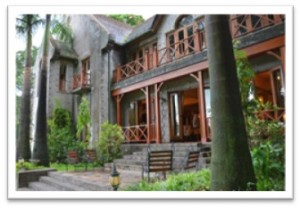 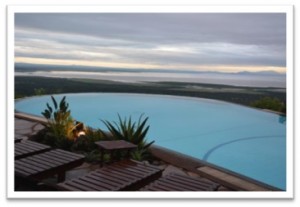 Next morning we met up with our driver / guides to set off for our first stop at Shoprite in Arusha for some last minute shopping and to ensure that we had enough refreshments for the week.  We drove through the local town of Mto Wa Mbu (Maasai for Mosquito Village), tasted their red bananas en route to Manyara National Park where we did our first game drive. 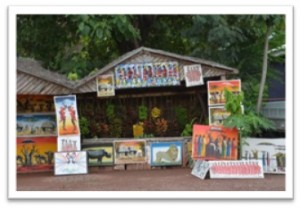 The road through this park takes you through a very lush jungle like forest where apart from an abundance of bird life also hosts many baboon troops as well as blue and vervet monkeys.  Through the forest grassy floodplains opens up and here we spotted buffalo, zebra and a huge lizard making its way across the plains.  That evening, we stayed at Lake Manyara Serena Safari Lodge from where you have an absolutely stunning view over Lake Manyara and where you definitely have to go for a swim in their pool with a view come rain or shine.  This hotel, because of its ambience, is definitely a firm favourite with me. 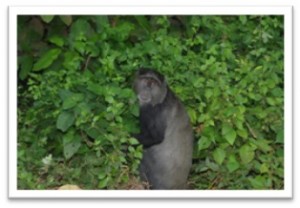 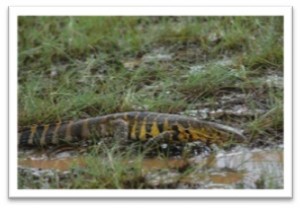 On our way to the Serengeti, we visited a Maasai Village, which to me was a great experience as I have always been intrigued, by their history and the way they live from a previous visit to Kenya.   At that time I bought the book called ‘The White Masai’.  The story is about a German women living in Switzerland that visited Kenya with her boyfriend.  She falls in love with a Maasai warrior and on her way back at the airport she makes a decision to stay – a very interesting read and in 2005 a film based on her autobiography was released.  The Maasai warriors can jump very high and they welcomed us with song and dance and a good show of their jumping abilities. 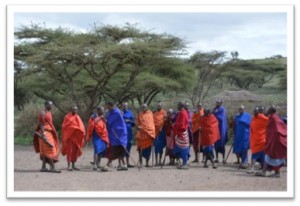 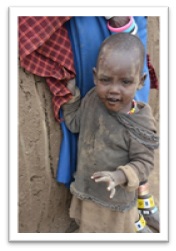 En route to the Serengeti, we drove past the Ngorongoro Crater and through some quite dense and beautiful forest area eventually opening up into the endless plains of the Serengeti National Park.  Here with wildlife in abundance and home to approximately 1.5 million Wildebeest (I actually think more…) and 250 000 zebra, you are sure to have a wildlife experience forever to remember.
Depending on the operator you use, you will have the experience of a lifetime.  This just stresses the fact that your choice of operator in the Serengeti is of utmost importance.  Spotting broken down vehicles out on the plains and hearing foreigners complain to local people about their guides /operator made me once again realize the importance of choosing the right operator and that there is a definite reason for sometimes paying more!  We were never restricted as to where we were going to go or as far as time is concerned, except for abiding to the Park’s rules.  Knowledgeable guides, new and clean vehicles, built in fridge/freezers added to our comfort and enjoyment of the whole experience.
Seeing and living the migration – over a million large wild animals travelling a distance of 500km circular route is something you have to see for yourself as a picture or telling you about it can never do it justice.  If you have the opportunity to see it from a height, it literally looks like a never-ending swarm of ants in the distance. 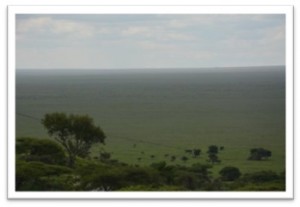 Part of the Serengeti experience was a Balloon Safari.  Getting up at 04h00 to be ready for the transfer to the launch site, I realized that it has been a long time since I have seen the break of dawn – indescribably beautiful over the Serengeti Plains.  For almost an hour the Balloon Safari took us over sights of Impala, Hippos, Giraffes, vultures nesting in the top of the trees, buffalo and more to eventually land pretty close to a herd of Elephants.  What an experience topped with champagne in the veld and later a lovely breakfast served in the bush in true colonial style. 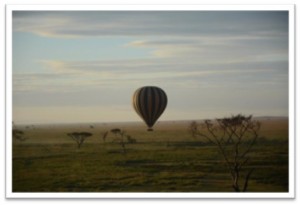 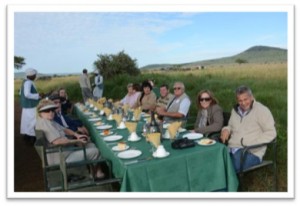 The roads in the Serengeti should not be attempted without a 4wheel drive vehicle.  On our last day was cause for great ‘excitement’ when one of our vehicles was stuck in the mud and we all had to get out close to the Wildebeest and with a Lion watching us from a rock not too far in the distance.  We left the Serengeti the next day for an overnight stay at the Ngorongoro Serena Safari Lodge – voted one of the best hotels in the world and clinging to the rim of the crater providing beautiful views over the 8th wonder of the world, the Ngorongoro crater.  25 000 Mammals wonder the plains of the bottom of the crater that we toured the following day after descending 600m into the crater.  Regular small earth tremors apparently cause the female elephants to stay on the outside and mainly bulls can be found in the crater, many with huge tusks.  We were told that so much interbreeding has taken place amongst the lions that you now find pygmy lions in the area.  Asking why the lions never leave the area, we were told that it is because they are scared of the Maasai people.   Myth about the Maasai is that each young man is supposed to kill a lion before he is circumcised.  Killing a lion gives great value and celebrity status in the Maasai community.
A 7night safari is long enough as you do a substantial amount of driving, getting up early in the morning and being busy all day long – if it is not just enduring the roads, working on your many photographic memories.
A lovely forest stay ended our Safari trip and here I definitely could have stayed another night or 2 to get back to reality, to rest and just to savour the beautiful surrounds in 5* style in the Tanzanian bush.
Some last minute shopping on your way to the airport – Maasai cloth very popular and what about a beautiful tanzanite or two?  Never knew they came in so many beautiful colours and though I was not allowed to take a picture, were shown the newest largest tanzanite ever found – now on its way to a museum.  Whether real or not – I do not know…
Tanzania is one hour ahead of South Africa.  The capital City is Dodoma and according to the 2011 census, the Country has a population of 46.22 million people.  The Country is divided into 30 regions of which 5 are in Zanzibar.  Approximately 62% of the population is Christian and about 35% Muslim.  Arusha is the 4th largest city in Tanzania. 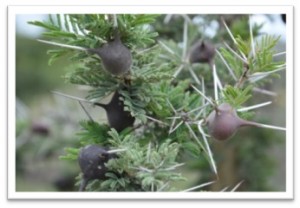 We stumbled on this very interesting tree shown above – Acacia drepanolobium, locally known as whistling thorn.
It has developed a number of strategies for defence against damage from herbivory.  One is to intersperse its leaves with long spines, and another is to play host to ants who defend the tree by attacking and irritating any herbivores who try to eat the leaves.
The whistling thorn grows up to 6 meters tall.
The common name of the plant is derived from the observation that when wind blows over bulbous thorns in which ants have made entry/exit holes, they create a whistling noise.
An amazing experience and we invite you to join our Migration Safari to the Serengeti in May 2014.  Dates and further details will follow soon.  If you are interested, please let us know so that we can put your name on the list and inform you as soon as we have all the details.
Marianne Strydom
May 2013
Posted on 23 May 2013