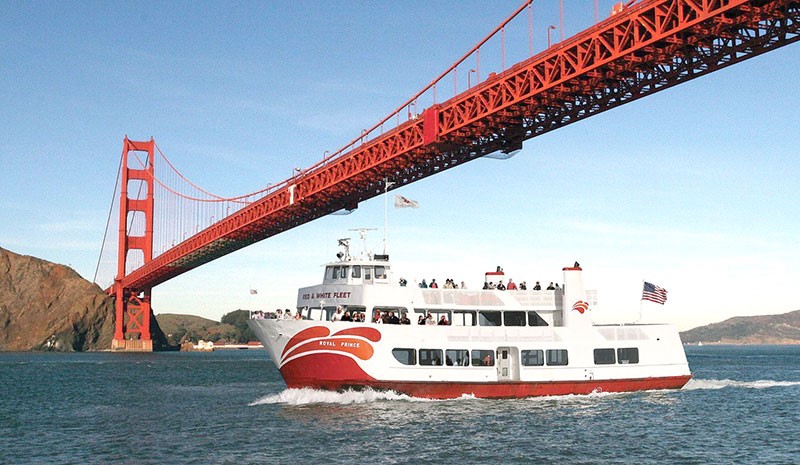 Credit to The B1M

75 years ago, the Golden Gate Bridge across the entrance to San Francisco Bay was inaugurated and was later honored as one of the “Seven Wonders of the Modern World”.

Despite carrying millions of tons of steel and concrete, Golden Gate Bridge is as elegant as a strip of silk across San Francisco Bay.
According to experts in the 1930s, building a bridge over the entrance to San Francisco Bay was unthinkable. The strait that connects the Pacific Ocean and the San Francisco Bay is up to 1600 meters wide and 90 meters deep. Moreover, it is located at the epicenter of the strong earthquake that devastated San Francisco in 1906 and killed 3,000 people with 13 km. Not to mention the wind speed here up to 100 km / h, tidal currents of 7.5 knots and fog covered many days of the year.
According to estimates by the San Francisco Municipal Engineers Association , the construction of this bridge cost $ 100 million, a huge number at the time. The problem for road and bridge engineers is to build bridges at a much lower cost. A person boldly accepted to do this. It was Joseph Strauss, an aspiring engineer and had previously built 400 bridges across the United States.
The construction of the Golden Gate Bridge has faced many objections, even litigation. The War Department is concerned that the bridge will obstruct waterway traffic; The US Navy feared a ship collision or bridge failure could block access to one of the key bases. The South Pacific Railroad, one of California’s most successful businesses, has filed a lawsuit alleging that Golden Gate Bridge abolished its ferry service.
Finally, Joseph Strauss not only “tamed” the business of transporting passengers by ferry, but also appealed to investors. In 1932, in the midst of the Great Depression, the founder of San Francisco Bank took up most of the investment of $ 35 million for the Golden Gate Bridge project.

The local government accepted the idea of Joseph Strauss, provided that he had to change the original design. A suspension bridge design was considered the most feasible because it was consistent with the advances in metallurgy at the time and required by the US Navy. The original design of Joseph Strauss was inspired by the 19th century bridge design. The suspension bridge design was supported by a group of bridge designers, architects and scientists led by Professor Charles Alton Ellis.
Because Chief Engineer Joseph Strauss lacked experience in designing suspension bridges, most of the design-related tasks were undertaken by other experts. The weight of the bridge body will be allocated to the two cable blocks through the two main towers and fixed to the concrete at both ends. Each cable block has 27,572 cables, with a total length of 129,000 km, more than three times the circumference of the Earth.

The international orange color of the Golden Gate Bridge not only blends with the warm earth tones of the surrounding hills, but also helps aircraft and ships to recognize the bridge in bad weather.
Architect Irving Morrow is in charge of designing the overall shape of the bridge tower, lighting structures and art deco items such as street lamps, railings. He replaced the standard silver gray with the internationally famous orange to paint the bridge.

Golden Gate Bridge was started construction on January 5, 1933 with an estimated cost of more than 35 million USD and completed in April 1937, at a cost lower than the estimated 1.3 million USD.

Chief engineer Joseph Strauss leads the construction of the bridge from start to finish. The southern pillar was built at the depth of 33 meters. The pillar that built this pillar collapsed twice: once due to the crashing of the truck into the fog and once the storm. In addition, because tidal water flows rapidly in the strait, underwater work can be only during low tide: four times a day and each lasting only … 20 minutes.
To build the bridge foundation to withstand earthquakes and storms on a muddy sea floor, Joseph Strauss built a giant bottomless steel chamber and lowered it to the bottom of the sea. To prevent water from entering, the steel chamber must have a pressure higher than the water pressure at a depth of 33 m, making bridge pier workers work in extremely dangerous conditions, with difficulty breathing, bleeding. nose, fainting, and even paralysis.

The Golden Gate Bridge is highly resilient and withstands strong earthquakes.
In the end, the brave bridge builders built two solid giant foundations for the two main pillars of the 227 m high suspension bridge, before Christmas in 1934. The hardest part was over, the work was over. The next becomes much easier but equally dangerous arduous. Through the use of a mobile safety net placed beneath the construction site, Chief Engineer Joseph Strauss has avoided many tragic accidents.
After more than 4 years of extremely hard labor, a 2.7 km long orange suspension bridge sprouted up, with an extremely graceful and elegant appearance despite carrying millions of tons of steel on itself. This is the longest suspension bridge in the world as of 1937, a symbol of the city of San Francisco and also the pride of the United States.
Golden Gate Bridge is honored with technical masterpieces and listed as “Seven Wonders of the Modern World” (1995), along with the Empire State Building, Eurotunnel and the Panama Canal. Frommer travel magazine said that it “is one of the most beautiful and most photographed bridges in the world”..

The inauguration ceremony began on May 27, 1937 and lasted for a week. 200,000 people walked on the bridge by foot or ice skating. On the opening day, the mayor of San Francisco and officials took a ferry to Marin County, then crossed the bridge in a motorcade.

Coming from an artist family, Joseph Strauss has always been haunted by bridges, literally. After a football accident, student Joseph Strauss was hospitalized for weeks and saw the Cincinnati Covington Bridge every day from his hospital bed.
Joseph Strauss’s graduation thesis designed an 85-kilometer railway bridge over the Bering Strait, connecting America and Asia. Compared to this century’s aspirations, the challenge of the Golden Gate Bridge is still extremely small.
Tragically, over a decade of campaigning and persuasion devastated the health of Joseph Strauss.. Immediately after starting construction of the bridge in early 1933, Chief Engineer Joseph Strauss was absent for 6 months. Rumor has it that he had to cure a debilitating illness.
After more than 4 years of “hard work and hard work” of constructing the bridge, the master architect Joseph Strauss no longer had the strength to celebrate. He looked much weaker than his 67-year-old and handed the Golden Gate Bridge with dark, haggard eyes. With a trembling voice, he only spoke briefly in the opening speech: “This bridge does not need praise. It speaks for itself.”