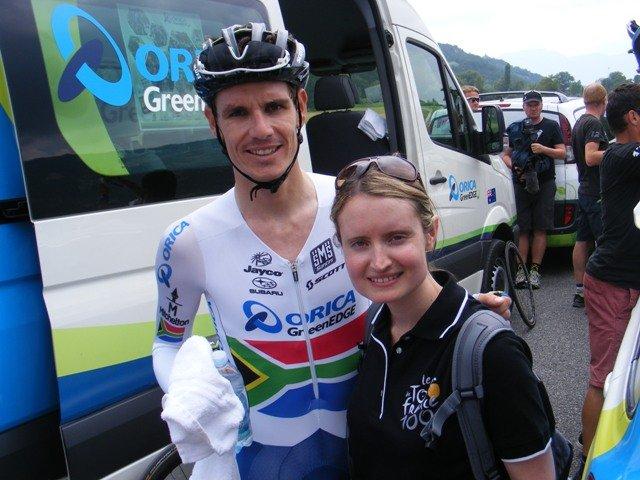 My first time flying on Turkish airlines.  What a great experience! Although you fly via Johannesburg from Cape Town, you stay on the plane for about an hour while the Johannesburg passengers’ board. The entertainment and food on board is definitely top class!  We had three hours in Istanbul before our flight to Lyon.

We unfortunately had no time to explore Lyon as we took the bus directly from Lyon airport to Grenoble.  Grenoble is a beautiful city and also the base for ski enthusiasts during the ski season. Getting around by tram is very easy and convenient.  My favourite part was when you get out at Notre Dame Museum station.  It is a beautiful part of Grenoble with many restaurants and ice cream shops.  In the distance you can see the cable car that goes up to the Bastille.

We spent 3 nights in Grenoble as it was our base for travelling to Chorges where stage 17 of the 2013 Tour de France was held.  It was the 32km individual time trial from Embrum to Chorges.  What a great feeling to say that you have experienced the 100th Tour de France! I would recommend an individual time trial stage to anyone that wants to experience the Tour de France in real life. You see the riders as they pass through the finish line and you can also interact with most of them.  It was difficult not to spend all our money on souvenirs as there were so many to choose from.  What a proud moment it was to waive our SA flag when Daryl Impey came through the finish line!

From Grenoble we took an EasyJet flight to Brussels where we spent 3 nights.   A visit to Grand Place, Mini Europe and the Atomium is well worth it.  No trip to Belgium would be complete without a one night stay or at least a day trip to Bruges.  The train takes about an hour from Brussels to Bruges and goes via Ghent.  Outside Bruges Station you can rent a bicycle and cycle to the old town centre.  The cost thereof is approximately EUR12 per day and you need to put down a EUR50 deposit.  There are lots to do in Bruges.  Taking a 30 minute ride on the canal is a great way to explore.  The canal is about 5km long.   For me however, the best way was on a horse-drawn carriage ride from Market place.  It costs approximately EUR40 per carriage and takes around 30 minutes.  Though a little bit on the expensive side, this was definitely a highlight for me!
The next morning we headed to Paris on the TGV train.  No better way to travel this route!  It was the 21st of July 2013 and the last stage of the 100th edition of the Tour de France.  What an honour to have been there!   It was the middle of summer in France and unbelievable hot.  Our hotel was right by the Eiffel tower and we decided to walk to the Champs Elysees (approximately 20 minutes) instead of taking the train.  Remember to watch out for the pickpockets in Paris!  It turned out they pickpocketed someone right in front of us on the metro!

Getting to the Champs Elysees – where the riders did the last couple of laps before ending their 3 week journey – we were amazed to see how many fans share the same passion for cycling!  We also saw the “caravan” come past.  This is a convoy of hundreds of cars and people playing music and doing the same route as the cyclists.  They came through quite early as they needed to be finished before the riders arrived in Paris.  They are there for promotional reasons and also to create excitement with the spectators who anxiously await their cycling hero’s!

No stay in Paris can be complete without a picnic in front of the Eiffel Tower.  In summer the lights flicker every hour for 5 minutes until approximately 01h00 am in the morning.  There are people selling wine and beer if you maybe forgot yours!   For all the romantics at heart…this is a must!

We left Paris the next day and flew down to Rome for the last part of our journey arriving at Ciampino airport just before midnight.  This is not the main airport, but very convenient!  The metros were already closed so we decided to take a taxi to our hotel.  Our first morning in Rome we decided to do the hop-on hop-off bus just to orientate ourselves with where all the major attractions were.  My suggestion would be to always try and do the official red sightseeing bus as it was much more frequent than the operator we used.  The Colosseum was one of the highlights on the route. The queues weren’t that long and for only EUR12 per person it’s well worth a visit!  The Trevi fountain is a great place to take photos.  It is almost just as busy in the evening as during the day, but for some reason there is always an open spot for you to flip a coin and make a wish!   We even saw a marriage proposal right in front of us…

Before we knew it our 3 nights in Rome came to an end and it was time for us to fly to Istanbul for our last stop.  We only spent 1 night in Istanbul at a hotel in Sultanahmed which is a great central area from where to explore the city.  We decided to make use of the public transport to experience it like the locals do. What an experience it was!  The Turkish metros work with tokens and after a crash course from one of the locals on how the train system works, we learnt that it will cost us 3 Liras to travel to where we needed to be!  Yeah!  Our hotel was right by the Blue Mosque with The Grand bazaar only minutes away.  There were lots of bargains on shirts, handbags etc.  This was quite an experience as the shop owners don’t take no for an answer.   We also visited Taksim which is just another area of Istanbul.  This is where all the designer shops are so for shopping and sightseeing I would definitely rather recommend staying in Sultanahmed.  Although Istanbul is not my favourite city in the world, I do think it is worth spending one night or more to at least experience the Turkish culture.   With the Turkish visa still being free… why not!

Arriving back in Cape Town, I realised again that Europe just has so much to offer.   Even though my feet were in pain most of the time (from all the walking..)  … I’ll go back any day!!